How To Steal The White House - goes on pre - release today 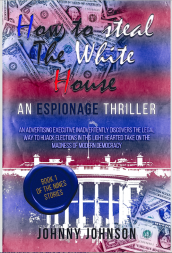 NEW YORK - s4story -- English writer Johnny Johnson's new novel How To Steal The White House goes on pre-release today ahead of its official worldwide publication just days after Joe Biden's inauguration. It tells the story of the political disruption caused by the inadvertent discovery of a voter targeting formula derived from the new dark art of big data analytics.

The book is the first in a new series of The Nines, a secret team in British Intelligence who were recruited for their high IQ's and tasked with resolving the trickiest of problems quickly and quietly before anybody else spots them.

The problem in this case? The end of democracy. Not by mob rule or general chicanery but by legal ownership of a profiling patent. It won't win you every vote but then you don't need every vote. Only a majority. That much, at least, hasn't changed. Although everything else has.

More on S For Story
' It's not often that fiction and reality line up like this ' said Johnny. ' When they do it's hard to spot the joins, which should be a concern for the good guys because the bad guys are hoping nobody will notice'