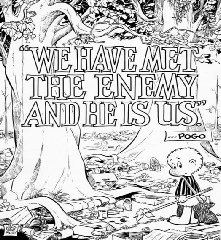 Forced indoors instead of outdoors Earth Day aficionados are queuing up (6 feet apart and in their living rooms) for the virtual screening of Earth Day films and Q&A with film-makers
ENGLEWOOD, Fla. - s4story -- Just when we thought that a new dawn on Earth Day's 50th year would be a real bummer, spent locked up inside watching Corona Virus coverage, Netflix, and that damnable stain up on the wall we are just about to crawl up, Planet Englewood has come to the rescue, announcing the second annual Englewood Online Earth Day Film Festival.

Not to be outdone by Lady Gaga and all her cool friends that can sing really good, it is time for some REAL entertainment from some of the best films curated from the many submitted to the Earth Day Film Festival people who, as you may recall, gave us such notable titles last year as Le Grand Pissoir.

More on S For Story
Oh no – cue a collective groan rising up to the rafters – I have yet to get my stimulus check, how am I going to afford to pay what must be a HUGE price for such exquisite film entertainment that is ALSO educational – complete with a Q & A with film producers during this live stream event?  Fear not fellow huggers of trees.  It is free!

Just visit the webpage for the film festival by going HERE.

Feeling guilty for watching free stuff while the sponsor of Earth Day took a beating at the hands of that nasty virus that caused us to cancel Earth Day?

Rather than paying a therapist to get over it, why not donate the princely sum of five bucks towards the Planet Englewood Earth Day Film Fest?  All proceeds go to the nice folks at the non-profit that has been sponsoring Earth Day for all of these years – except this one (sniff).

But don't feel obligated.  Enjoy the show – it is well worth the price of admission.

More on S For Story
You can check out the films to be screened HERE.

One is an animated short called How a Song Saved a Species.

Get your tickets early before they sell out (oh, forgot it is free) so you can reserve a good seat six feet away from the nearest person (in your living room) and start practicing how to eat popcorn with a mask on your face.

Enjoy the show but beware – there may be a quiz afterward.

And don't forget to wash your hands before you put them in the bowl of popcorn!
http://planetenglewood.com/filmfestivalpage.html