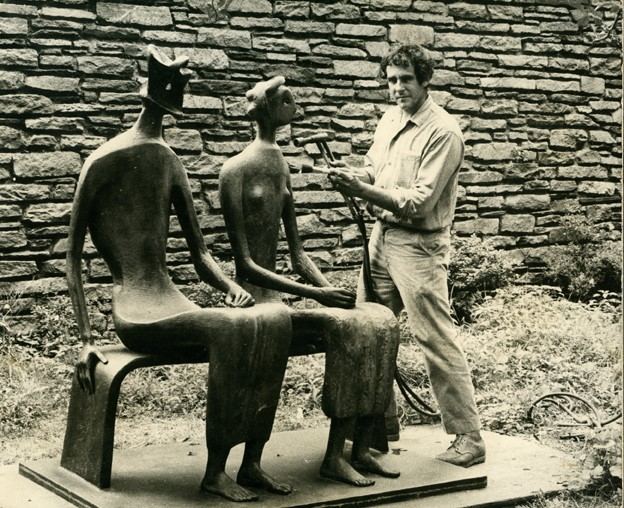 EAST HAVEN, Conn. - s4story -- Ronald Joseph Cavalier, the foundryman the Associated Press credited as being the first to use the ceramic shell technique to cast artwork into bronze, died of natural causes in Marietta, GA on April 28, 2020. Cavalier began his 60-year foundry career at Scope Precision Castings in Norwalk, CT before starting The Renaissance Art Foundry in Norwalk, CT and later the Cavalier Renaissance Art Foundry in Bridgeport, CT where he used the innovative ceramic shell lost wax process to produce countless works. Across the span of his career, Cavalier cast and restored bronze, steel, silver, aluminum, concrete, pewter, and brass pieces of small to mammoth proportions for some of the world's most renowned artists including Brancusi, Calder, Giacometti, Morre, Nakian, Remington, and Rodin as well as contemporary artists Tomm Otterness, Sandro Chia, Brian Hunt, and others. He restored and preserved the Hirshorn sculpture collection before it left Greenwich, CT for Washington, D.C.  He also serviced many museums including the Museum of Modern Art, the Metropolitan Museum, Hirshorn Museum and Sculpture Garden, and the Smithsonian Institution.

More on S For Story
Cavalier was born in Brooklyn, NY on May 10, 1933 to Alfred and Mae Cavalier. He was the youngest of four and his father was a math and music teacher, machinist, draftsman, bandleader, musician, and Masonic Lodge member. Growing up on Atlantic Avenue, Ron enjoyed neighborhood stickball, raising pigeons, and fishing on Coney Island. After high school, he studied at the American Academy of Dramatic Arts in Manhattan, and apprenticed in Maine summer stock theater appearing with Dinna Barrymore, Lionel Standish, and Kenneth Nelson in South Pacific, Finian's Rainbow, Oklahoma, Death of a Salesman, and Hamlet. He originated the role of Ghost of Christmas Past for the Music Theater of Connecticut's world premiere of Ebenezer, played Judge Taylor in To Kill a Mockingbird at the Polka Dot Playhouse, and was in numerous performances for the Darien Dinner Theater, Westport Community Theater, and Stamford Theater works. Cavalier was a perfect tenor who sang with the New Haven Chorale, and loved singing opera. His acting career continued throughout his life with his most current works being the portrayal of various saints and popes for Eternal World Television Network programs, most recently The Wolf in Sheep's Clothing in 2018.

During summer stock theater on Peaks Island, ME off of Kennebunkport, he met the actress Cecelia Mary Mack whom he married. The couple resided in New Jersey when Cavalier was drafted to serve in the U.S. Army during the Korean War as part of the "Bloody One" unit. Posted in Germany, he was a radio broadcaster for the Armed Forces Radio Network with co-host Nick Clooney from 1953 to 1955. Returning home from war, he and Cecelia moved to Norwalk, CT where he began his foundry career, raised a family of five children, and was a member of St. Matthew's Church. In 1987, he moved to East Haven, CT where he lived on Pequot Street for over two decades before moving to Georgia in 2018.

More on S For Story
In addition to foundry life and acting, Cavalier also was a documentary filmmaker. In the late 1970's, his company Cavalier Productions produced two films about art collector Joseph Hirshorn: The Collection that Became a Museum and the award-winning Life of Joseph Hirshorn.

A self-made renaissance man and passionate entrepreneur, Cavalier also owned a Vermont dairy farm and planted and managed a vineyard on his lakeside home in Benson, VT where he made wine. A die-hard New York Yankee fan, he never missed a game on TV, he was also a devoted Patriots fan. Athletic and health conscious, a lover of the outdoors, dogs, music, boating, and fishing, Cavalier led a remarkably active life.

A small celebration of life will be held in his honor post-COVID in Norwalk, CT.  If you would like to share condolences with the family, please contact Jane Cavalier Lucas at  jane@brightmarkconsulting.com.  Donations to honor Ron's life can be made to The Best Friends Animal Society https://bestfriends.org.