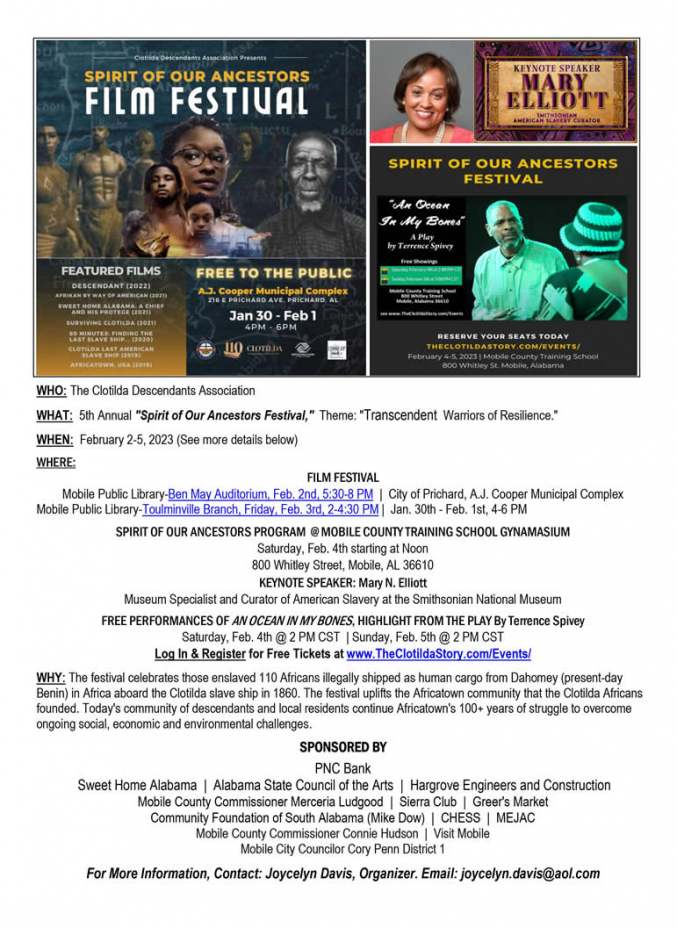 Event Aims to Honor Clotilda Africans. Founders of Africatown, and Highlight the Community's Continuing Struggle for Human Rights
MOBILE, Ala. - s4story -- Keynote Speaker Mary Elliott of the Smithsonian Museum, an updated An Ocean in My Bones play highlight by Terrence Spivey, and a showing of the critically-acclaimed, Netflix-Obama documentary Descendant are the featured events of the Fifth Annual "Spirit of Our Ancestors Festival" happening February 2-5, 2023. The festival -- with Its 2023 theme, "Transcendent Warriors of Resilience" -- is hosted by The Clotilda Descendants Association (CDA).

Festival Organizer Joycelyn Davis, a CDA co-founder, is continuing in the spirit of other Africatown ancestors, who started a similar event decades ago, when she was a child. "We started this festival five years ago from humble beginnings. I'm just carrying on the legacy of those who did the original festival. Hopefully, it continues to grow and carry on for decades and decades to come," she says.

The festival event starts with showings of films about Africatown, most notably Descendant. The 2022 Netflix-Obama backed documentary features Ms. Davis and other descendants including Emmett Lewis -- whose ancestor, Cudjo Lewis, was until recently known as the last-living survivor of the Clotilda, the last known slave ship to Africa in 1860. The ship illegally brought enslaved peoples back to the United States, all on the bet of Mobile plantation owner Timothy Meaher, who boasted that he could get away with the crime (importing Africans for slavery was illegal in 1808). The documentary -- directed by Mobile native Margaret Brown -- chronicles the community's reaction to the spectacular 2018 discovery of the Clotilda's charred ruins in the Mobile River, burned and sunk there to hide the act of piracy. Descendant also highlights the Africatown community's long, sad history of degradation, and its defiant leaders' work to undo generations of environmental and other injustices.

More on S For Story
Mary N. Elliott, museum specialist and curator of American slavery at the Smithsonian National Museum, will be the festival's keynote speaker this year. Ms. Elliott helped to research, conceptualize, and design the "Slavery and Freedom" inaugural exhibition for Smithsonian's National Museum of African American History and Culture.

Ms. Elliott's 2018 seminar in Africatown, given around the time of the initial Clotilda discovery by local reporter Ben Raines, inspired Ms. Davis' own personal journey. Like Ms. Elliott, she began to embrace her role as the next torchbearer of her family's history. And she restarted the festival popularized initially by her aunt Lorna Woods and other descendants, who defiantly told the story of the Clotilda and the 110 Africans it brought to America, decades before doing so was popular.

The Africatown story was brought to life through its first theatrical treatment during the 2022 festival in a staged highlight of the play, An Ocean in My Bones, by Cleveland-based playwright and award-winning director Terrence Spivey. This year, Spivey updated the play with more historical nuances and facts to make its performance even more powerful.

The updated version draws on dialogue that was based on interviews with descendants, further historical research, and aspects of the popular 2022 movie Woman King, a fictionalized account of the Agojie, the elite warrior women (https://en.wikipedia.org/wiki/Dahomey_Amazons) of the Kingdom of Dahomey (in present-day Benin). In slave history, the Agojie raided surrounding towns and villages, killing and enslaving thousands of people. Among the survivors was Cudjo, who in a 1927 interview with Zora Neale Hurston recounts the horrors of his capture by the warrior women and his being sold into slavery by the Dahomean kingdom. Hurston's interview notes (https://www.smithsonianmag.com/arts-culture/zor...) were turned into a 2018 best-selling book, Barracoon: The Story of the Last "Black Cargo."

More on S For Story
The festival's films will be shown at the Mobile Public Library's Ben May Auditorium and Toulminville Branch, and at the City of Prichard's A.J. Cooper Municipal Complex. The keynote address and the play will be held at the Mobile County Training School. The play is FREE, but seating is limited. Free tickets MUST be reserved on the Clotilda Descendants Association website, https://theclotildastory.com/events/.  Please see the attached flyer for more details.