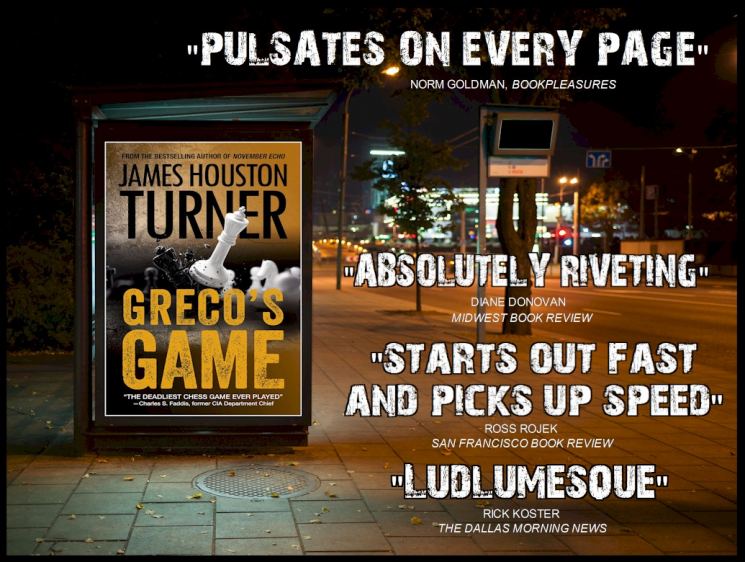 Last year, Wonderfilm acquired the film and television rights to Turner's bestselling Aleksandr Talanov series of action thrillers about a former KGB agent who became a spy for America. "Over the course of the past months, Wonderfilm met with many writers and directors," says founding partner, Bowler, "but when David met with us, I was blown away by his vision for bringing Greco's Game to theaters. I couldn't be any more excited with David taking the helm."

More on S For Story
Set in modern-day Los Angeles against the backdrop of human trafficking and a famous chess game used as an assassination plot, what starts out as a vendetta by Talanov to kill the assassin becomes a journey of redemption with the help of two young women being held captive by human traffickers. "Talanov is such a rich and nuanced character," Marconi says, "and the novel's plot is so timely with what is going on in our world. I'm excited to be working with Jeff and Bret at Wonderfilm."

Turner says his work years ago at a Los Angeles rescue mission helped inspire one of the characters in Greco's Game. "While working for the mission, I met several young women who were victims of human trafficking. At the time, I barely knew such a horrific practice existed, but their stories opened my eyes to the reality of this monstrous crime. Greco's Game is therefore a tribute to those quiet, heroic women I met at that women's shelter."

As for the chess game, "The idea for Greco's Game came from an actual chess game I played on one of my smuggling trips behind the old Iron Curtain," Turner continues. "My opponent was one of my contacts, who asked if Americans knew how to play chess, at which point he laughed, as if the idea were absurd. I said I was not very good at chess, so he invited me to play a game, saying he would go easy on me. We played a total of five games and I won four. He couldn't believe an American kept beating him. Later, over drinks, he accused me of suckering him with my "I'm-not-very-good-at-chess" act, after which he accused me of letting him win that final game. I was guilty on both counts but never admitted it. I just smiled and poured us another round of slivovitz. Those chess games ultimately formed the plot of Greco's Game, about suckering a hasty opponent, which Gioachino Greco did in his original 1619 game that is famous for its queen sacrifice and checkmate in only eight moves."

More on S For Story
Other books in the Talanov thriller series include November Echo, Department Thirteen, and the soon-to-be published, Dragon Head. After living twenty years in Australia, the Kansas-born Turner now lives in Austin, Texas. More information about Turner may be found on IMDb.