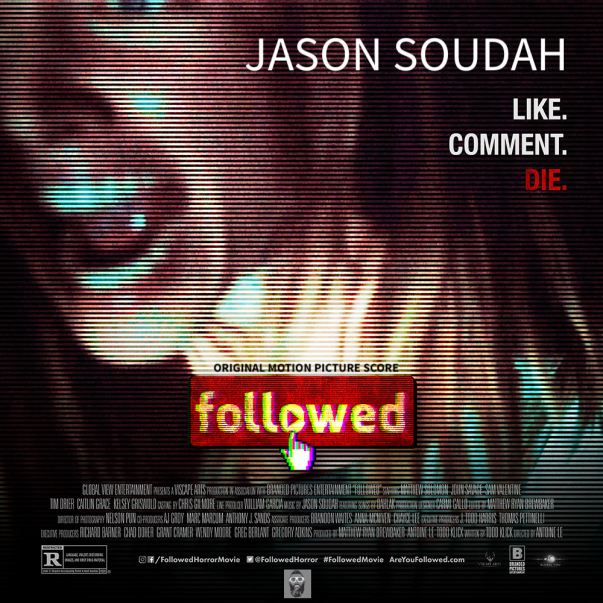 LOS ANGELES - s4story -- Jason Soudah's score to the horror/thriller, Followed is getting a digital release on July 7, 2020 by Derby Zero Six Productions. The album consists of 14 original tracks. The film was distributed by Global View Entertainment on June 19, 2020. Followed stars Matthew Solomon (Ballers), John Savage (The Deer Hunter), Sam Valentine (A.P. Bio), Caitlin Grace (Jill and Bobby), Tim Drier (Murder Among Friends), and Kelsey Griswold (The Assassination of Gianni Versace: American Crime Story). It was directed by Antoine Le, written by Todd Klick and produced by Matthew Ryan Brewbaker, each making their feature debuts. The score will be available on all major digital sites including iTunes, Spotify, Amazon and Apple Music.

When discussing the film's score Jason says, "A lot of work was put into this score and I am really excited for people to hear the highlights on this album. I included music which ranges from dreamy strings, through hip-hop, into aggressive synth and cello assaults!"

Born in Tokyo, and of Irish/Cypriot descent, Jason's passion for music started from a young age. At 5 he was playing piano and by 13 he was recording original songs, first programming the tracks on his keyboard then overdubbing vocals and guitars between two cassettes on a twin tape-deck!

More on S For Story
Jason recently "trailerized" the song "Falling Sky" by UK artist Kirsty Bertarelli (writer of "Black Coffee" by All Saints), which is currently available for licensing. Listen to both the original song and Jason's trailer version on the MUSIC page.

Right now, Jason is writing music for multiple film projects, his main project being the feature film "The Dougherty Gang", co-writing and co-producing songs for a forthcoming musical, mixing scores (most recently for BAFTA-supported composer Emily Rice), and collaborating with other songwriters and artists (as a co-writer and/or producer) with a view to creating songs for them to perform or to be cut by other artists. Jason also produces backing tracks for KIDZ BOP, collaborating with Gary Philips, writes for commercials and other promotional films, and is a freelance composer for several music libraries based in the US and UK.

More on S For Story
Before becoming a Composer, Jason performed regularly in the UK and US as a singer/songwriter, garnering national US radio play for his debut EP "six hours", which included "Wallowing", #1 add on independent radio when it was released. This EP was produced by Romesh Dodangoda (Bring Me The Horizon, Kids In Glasshouses, The Blackout…). The beginnings of buzz in the US triggered radio attention in the UK, with interviews and live performances on BBC Radio 2, BBC Radio Wales, and Capital FM South Wales, and spurred on national press coverage. Jason went on to make an album with Sylvia Massy (RHCP, Smashing Pumpkins, Skunk Anansie…) as Producer/Engineer, and Michael C. Ross (Vanessa Carlton, Lisa Loeb, Counting Crows…) as Engineer/Mixer.

As a composer in his own right, Jason recently scored "Braking For Whales" which won him his first award: Best Music (along with Music Supervisors Frankie Pine and Mandi Collier) at The Boston Film Festival, 2019; as well as scoring and score-mixing the multi-award winning Horror Feature "FOLLOWED", and scoring the Emmy-Awarded Documentary Feature "Paradise Reef: The World Is Watching."

In terms of synch, Jason has had songs featured on MTV (The Real World, Teen Mom…), he wrote "A Sporting Chance" for the movie "Eddie The Eagle," "Ladyphones" for the movie "GI-JOE: Retaliation," and co-wrote "Handy Candy" for the movie "Miss Peregrine's Home For Peculiar Children" with composers Matthew Margeson and Mike Higham.