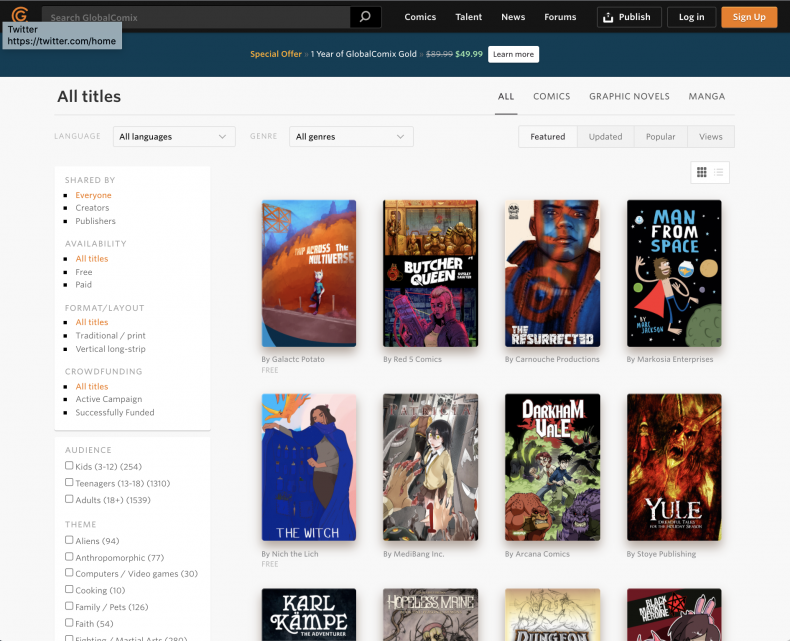 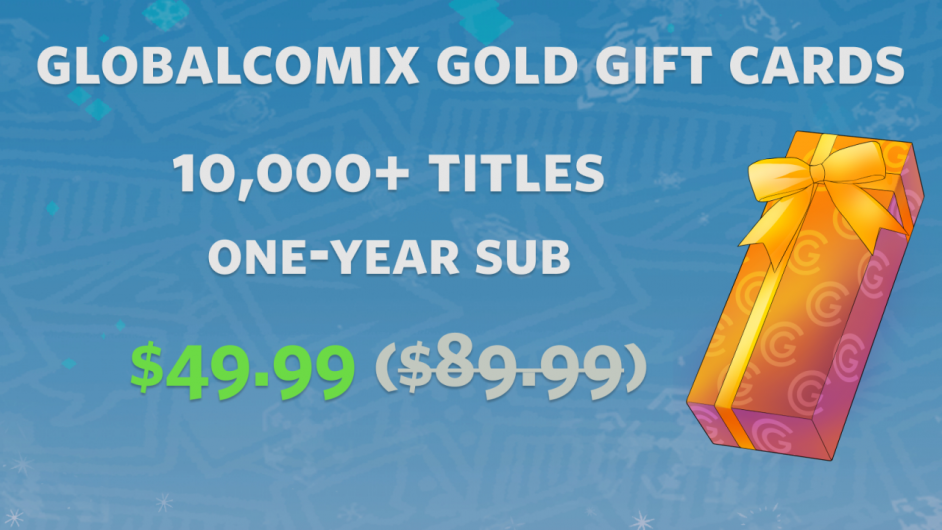 GlobalComix is doubling down on the spirit of giving this year by offering gift cards for yearly access to unlimited digital comics, graphic novels, and manga for just ​​$49.99 as a limited time deal until January 3rd, 2022.
NEW YORK - s4story -- GlobalComix, one of the fastest growing platforms for digitally reading comics, graphic novels and manga, announced their end of year sale. On the heels of their newly launched annual subscription, they are offering the ability to give the gift of unlimited access to their full digital library at a massive markdown to encourage new readers to see what the independent comics world has to offer. Beginning December 21st, 2021 at 12:01 AM EST and running through January 3rd, 2021 at 2:59 AM EST, a yearly subscription to GlobalComix Gold will be available to purchase as either a gift card or standard purchase at the low price of $49.99 -- 40% off the regular price of $89.99. The discounted subscription is now available on the GlobalComix Gold page: https://globalcomix.com/gold.

More on S For Story
As graphic novels, comics, and manga are capturing more readers than ever before through the digital space, the demand for more stories has skyrocketed. GlobalComix is meeting this demand with a growing library of 10k+ books from the industry's biggest up and coming talent, paired with a discovery engine that's designed to bring readers their next favorite series. Borrowing from the binge model of streaming services, GlobalComix elevates the best work coming from the smaller independent studios and creators, but has created an ecosystem in which the artists both retain their rights and monthly payments are split only between the creators whose stories a subscriber reads. The company keeps just a fraction of subscription fees and donations.

"You will find some of the best storytelling out there from the creators on GlobalComix, and as a team we're focused on making it as easy as possible for both readers to find their work, and the creators themselves to grow their audience and income," says CEO Chris Carter. "The difference is that while so many folks are focused on communicating to fans who already love comics, we believe wholeheartedly that there is a massive group of folks who may have not yet given comics a chance, but will fall in love once they read their first issue. So for the holidays, we're enabling folks to give the gift of this mecca of talent with friends and family."

Gift recipients and regular subscribers have the ability to read iconic titles, ranging from Mœbius (with stories now being adapted for the big screen by Academy Award-winning director Taika Waititi (Jojo Rabbit, Thor: Ragnarok)), to the entire library of pioneers of sci-fi-horror-fantasy known worldwide as Heavy Metal Magazine.

More on S For Story
Readers will be pleased to also find premium contemporary content from the ex-Marvel leadership at contemporary upstart AWA Studios, which are led by names like J. Michael Straczynski of Babylon 5, Michael Morici, Benjamin Percy, and Jason Starr. Reads will also find up and coming storytellers like UK-based BHP Comics with its critical darling Killtopia currently being adapted into a full animated series by Studio Voltaku. Heavily present are the leaders of crowdfunding revolution currently happening in comics, with Netflix's Adam Lawson and his Failed Superheroes imprint to USA Today Best Selling multi-talent Russell Nohelty.

GlobalComix's December deal for their Gold subscription will begin December 21st, 2021 at 12:01 AM EST and run through January 3rd, 2022 at 2:59 AM EST. For more information on GlobalComix, please visit https://globalcomix.com/.

GlobalComix is a digital comics publishing platform that enables comic creators and publishers to upload, publish, monetize, and translate their content to a global audience in multiple languages. Headquartered in New York, GlobalComix is a private venture backed startup led by a team of comics and software professionals.