Judson Press book recognized for national honors: 'With Liberty and Justice for Some' named as top award finalist 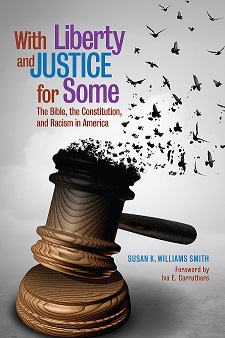 KING OF PRUSSIA, Pa. - s4story -- The Independent Book Publishing Association (IBPA) has listed With Liberty and Justice for Some: The Bible, the Constitution and Racism in America by Susan K. Williams Smith (Judson Press), as one of three finalists in the political and current events category of its 2020 national Benjamin Franklin Awards. The awards demand excellence in both content and design.

Released in fall 2020, Smith's book challenges assumptions that the United States is 'one nation under God,' that both the Constitution and the Bible have been interpreted without bias and that democracy and its principles of justice for all largely prevent the oppression or unequal treatment of individuals and groups. An attorney and an ordained minister, Smith uses the primary sources of our cultural and religious history to both make her case and inspire a response.

More on S For Story
"Susan could not have predicted that her book would come out in the year of Brianna Taylor and George Floyd," said Judson Publisher Laura Alden. "But she knows how and why we have come to this moment in our history. Her identification of the sacred texts that have been misused to justify white supremacy and systemic racial injustice couldn't be any more timely. She also knows that identifying the problem is not enough, and invites readers to join her in following Jesus as one who loves and liberates."

The recognition from the country's largest independent publishing association is a significant one for the author and for Judson Press. The title is assured to win a gold, silver or bronze at the IBPA Benjamin Franklin Awards ceremonies in May.

With Liberty and Justice for Some: The Bible, the Constitution and Racism is available from judsonpress.com and wherever books are sold.

More on S For Story
Founded in 1824, Judson Press is a publishing ministry of American Baptist Home Mission Societies, American Baptist Churches USA. It is committed to producing Christ-centered leadership resources for the transformation of individuals, congregations, communities, and cultures.

American Baptist Churches USA is one of the most diverse Christian denominations today, with approximately 5,000 congregations comprised of 1.3 million members across the United States and Puerto Rico, all engaged in God's mission  worldwide.

Filed Under: Books, Publishing
0 Comments
Latest on S For Story