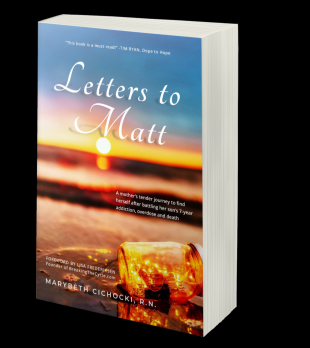 Letters to Matt underscores need for national accountability in overdose epidemic.
BALTIMORE - s4story -- AlyBlue Media announces the release of MaryBeth Cichocki's debut novel, Letters to Matt, a mother's memoir through the ugly side of addiction and fighting for change on Capitol Hill.

It began with a pop, and then excruciating pain followed by surgery. MaryBeth Cichocki's 30-year-old son became hooked on Percocet prescribed for a work-related back injury. As a NICU nurse, Cichocki knew the dangers of opioids and cautioned her son against taking too much. Yet instead of suggesting an interdisciplinary pain care program, his doctor continued to write opioid prescriptions to manage the pain. Seven years later, Cichocki's son was dead from a Percocet overdose.

Faced with the government's uncoordinated and underfunded efforts, Cichocki watched in horror as her son became a statistic in the worst drug addiction epidemic in American history. In his 7-year battle, her son lost both his business and his home and became part of a vulnerable population fighting a system to allow for the same care and protocol as other chronic diseases.

More on S For Story
When Cichocki's son overdosed, the halfway house responsible dumped him at a motel to die rather than taking him to the hospital. Trying to make sense of his death, Cichocki began writing candid letters to her deceased son voicing the ugly side of addiction and the uphill battle families face as they search for help. Originally posting her letters as a blog, at the request of followers, she released her writings in Letters to Matt, a poignant book that chronicles her journey through heartbreak and anger at the gridlock between families, government entities and for-profit pharmaceutical companies who fail to take responsibility.

According to the National Institute on Drug Abuse's 2018 data, 128 people die every day in the U.S. from an opioid overdose. The annual economic toll is an estimated $79 billion. Despite the fallout, thousands continue to suffer.

Turning her pain into purpose, Cichocki turned to advocacy. She has marched at national rallies on Capitol Hill, and was featured on the cover of U.S.A. Today for her efforts, which to date have culminated in six bills that changed how Delaware treats those who suffer from addiction.

More on S For Story
Now taking time to recover from cancer, Cichocki plans to resume legislative efforts to fight for a model of care that meets the needs of those living with opioid addiction.

Letters to Matt is now available on Amazon, Barnes & Noble, and in bookstores around the world. Learn more at www.alybluemedia.com/cichocki.