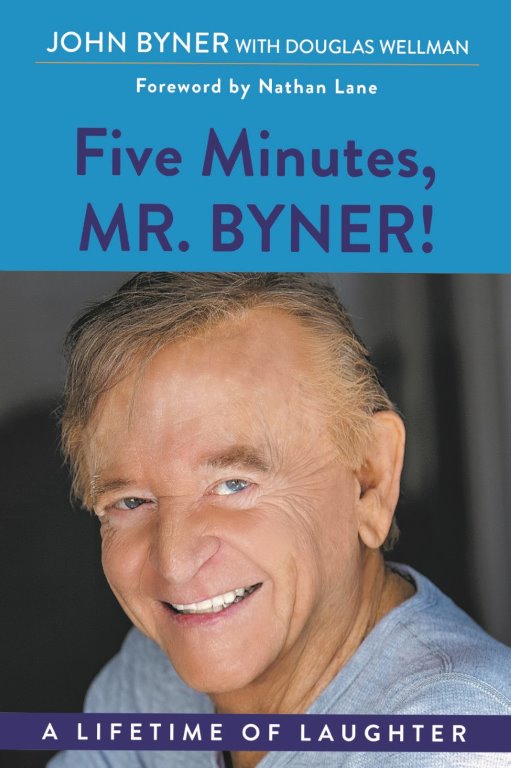 Story Shows A Painfully Shy Boy With No Connections, Few Resources, Transforming Himself Into A Man Who Entertains Millions Over Five Decades. Actor Nathan Lane Writes Book's Foreword
HOLLYWOOD, Calif. - s4story -- Veteran entertainer John Byner, a man of many voices and characters, from impersonating the slow, rolling gait and speech of John Wayne, to lending his voice to The Ant and the Aardvark cartoons has penned (with Douglas Wellman) his biography FIVE MINUTES, MR. BYNER! published by Boutique of Quality Books. His dead-on impersonations, as well as his unique talents as a character actor, have put him on the small screen in peoples' homes, the big screen in theaters, and no screen on Broadway.

". . . John has had a remarkable career spanning decades, from doing comedy in small clubs in Greenwich Village to The Ed Sullivan Show. . . Ed loved him. . . to The Tonight Show with Johnny Carson, to Steve Allen, who basically invented the talk show, to The Carol Burnett Show, to just about every major variety show or situation comedy there was on the air, to hosting his own variety show and introducing Bob Einstein as Super Dave Osborne, and on and on. . . . And he's still going strong, as funny and as kind as ever." – Nathan Lane

Growing up in a big family on Long Island, John discovered his uncanny ability to mimic voices as a child when he returned home from a Bing Crosby movie and repeated Bing's performance for his family in their living room. He discovered his talent made him the focus of everyone's attention, and allowed him to make friends wherever he went, from elementary school to the U.S. Navy. John started his career in nightclubs in New York, but soon found himself getting national acclaim on The Ed Sullivan Show. With that he was on his way. This memoir is the best and funniest moments of his life, career, and relationships with some of the biggest names in entertainment, both on and off the screen.  "I thought of doing a memoir a year before I began writing it. My friend (co-author), Doug Wellman, suggested years before that if I wanted to write a book he would assist me," remarked Mr. Byner.

More on S For Story
ABOUT THE AUTHORS:
John Byner's TV career break happened in New York City on Merv Griffin's "Talent Scouts Show" in 1964. After great exposure on both Gary Moore and Steve Allen's variety shows in 1966 and 1967, he clowned around on Ed Sullivan's showcase program over two dozen times and Johnny Carson's late-night haunt over three dozen times. He has lent his vocal library of voices to hundreds of cartoons and animated films.  To find out more about John and his book, visit: http://johnbyner.com/

Douglas Wellman was born in Minneapolis but moved to Los Angeles where he became a television producer-director for 35 years, as well as the assistant dean of the film school at the University of Southern California. He currently lives in Southern Utah with his wife, Deborah, where he works as a chaplain at a local hospital when not busy writing books.

All WriteLife books are distributed by IPG
www.ipgbook.com