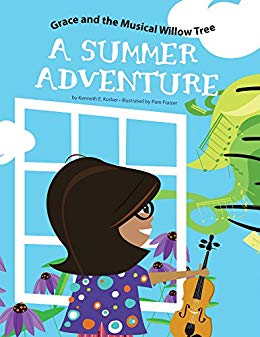 Music educators, PreK and early elementary school teachers are always looking for creative ways to enrich their students' learning. When it comes to music lesson plans, though, it can be a challenge to find resources that build music vocabulary.
Building young students' understanding of music vocabulary is important. It gives them words to talk about what they hear (and how it makes them feel).
ARLINGTON HEIGHTS, Ill. - s4story -- These words, though, are often in foreign languages and may be unfamiliar to children's ears. This makes it harder for them to learn and remember the words and their definitions.

Lesson plans that include stories can make learning easy and fun. Each of the Musical Adventures of Grace stories is full of music vocabulary and concepts. And it is easy to create complete, age-appropriate lesson plans from the stories.

The Musical Adventures of Grace stories set the stage (pun intended) for students to understand that percussion and rhythm underpin any kind of music. Grace's friend Fortissimo brings rhythm to life on his drums, but we also hear about rhythm in other ways. Teachers can talk about how in music, rhythm is the placement of sounds in time and percussion refers to any instrument that is struck when it is played, like piano, drums, marimba, cymbals and more.

Maestro Vik is the famous conductor who leads the concert in which Grace is transformed from a grace note into a little girl. In each story, it's clear to readers that he leads the ensemble (the group) and coordinates any solo or featured instrumentalists. Children learn that Maestro Vik is also a composer when he brings a surprise musical composition (or "piece") he has written for the Winter Concert.

In the Spring story, children are introduced to trills, the decorative musical effect made when a musician alternates between two notes that are close together. The Trills become their own characters in the series, appearing from time to time and behaving like a flock of birds.

The stories also introduce us to Arco, Grace's dog. His playful name makes a connection to the arco technique of playing a stringed instrument "with the bow" (rather than pizzicato or plucked). It can also be used as the Italian word for bow.

More on S For Story
The word glissando also appears, giving teachers an opportunity to share what this rapid slide through a consecutive series of notes sounds like. Early on in the series, Grace meets new friends Harry and Fortissimo when they move in across the street. Fortissimo's character can be an anchor for a discussion of musical vocabulary about loud and soft, from forte to mezzo forte to piano and pianissimo.

Browse our titles for preschool and early elementary school students.

Filed Under: Literature, Health
0 Comments
Latest on S For Story