New Memoir Looks Inside the Classic Sitcom The Jeffersons 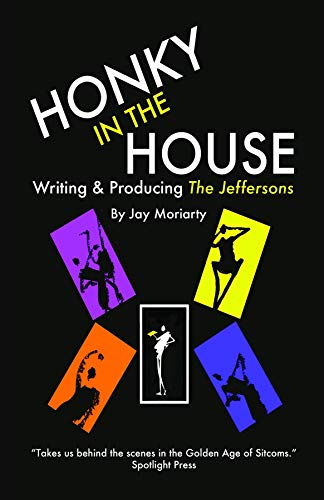 "Takes us behind the scenes in the Golden Age of Sitcoms" - Spotlight Press
STUDIO CITY, Calif. - s4story -- The 1975 sitcom, The Jeffersons, is experiencing a renaissance. It's flourishing with on-demand outlets including Amazon Prime Video. Hulu, DirectTV, and CTV. The All in the Family, The Jeffersons live TV special in May attracted ABCs largest total audience in the time period since 2012. What made The Jeffersons a television comedy hit and what explains its lasting appeal?

Honky in the House: Writing & Producing The Jeffersons the just-released memoir by Jay Moriarty provides some insight into the show's enduring success.

"People are always asking me about George and Weezy and what it was like to work with Norman Lear, so I figured I'd write a memoir about my experiences," said Moriarty.

In this witty, very personal and unapologetic account of breaking into the entertainment business, Moriarty serves up a master class in the essentials of writing and producing a TV series. He was able to realize his Hollywood dream of writing relevant comedy at a time of national upheaval--movin' on up with The Jeffersons, first as a writer then as Executive Producer. Honky in the House introduces us to some of the leading minds in television comedy including Norman Lear, the first TV producer to successfully combine humor with biting social satire. The book is also a reflection on the issues The Jeffersons dared to confront, including interracial marriage, suicide, transsexualism, and even the KKK.

More on S For Story
The Hollywood Standard Journal called  Honky in the House, "an impeccable and fascinating look into the inner workings of The Jeffersons, one of the most successful and groundbreaking TV series of all time. The book provides an engaging zeitgeist of the Seventies--an insightful examination of how The Jeffersons dealt with and helped mold the country's awakening to crucial social and racial issues. It's also a compelling story of personal success, and the capper is that it's all written with Jay's inimitable sense of humor."

A Hollywood insider, Jay Mortiarty, who came of age in the golden age of sitcoms, has written and produced half-hour comedies including The Jeffersons, All in the Family, Good Times, Maude, What's Happening Now!!, Dear John, The Royal Family, Here and Now, Cosby, Los Beltran; developed and written pilots for networks and studios including CBS, NBC, ABC, Warner Bros., Columbia, Paramount; and served as an Adjunct Professor in the Writing Division of the University of Southern California School of Cinematic Arts (film school). He is also the author/creator of the classic Sherlock Holmes board game 221 B Baker Street which has sold over 3 million games in seven different countries.