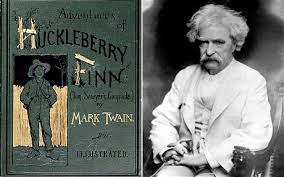 New book draws comparisons to use of raw language in Mark Twain's treatment of slavery and race relations in Huckleberry Finn
ENGLEWOOD, Fla. - s4story -- 135 years after Adventures of Huckleberry Finn was roundly criticized for coarse and racially charged language (by one count the "N-Word" appears 219 times) 20/20, a recently released novel by B Shawn Clark has sparked a similar controversy, drawing a rebuke in a Publisher's Weekly review for "the explicit use of racial slurs and hateful language" it says is a "gratuitous" means of demonstrating the "hurtfulness" of the words, and expressing incredulity that the white people in the book would react with surprise at the sight of a mixed-race group of people working harmoniously together in their neighborhood, saying the scene "feels more 1920s than 2020s."

More on S For Story
But in a You Tube episode entitled The Great Divide, in which a character from 20/20 reads from the offending passage, Clark contends that the review misses the point of what the character Peabody intended when he shouted the offending words at a white boy working with a group of Haitian boys, and says the sad truth of race relations in the 2020s has been "laid bare by recent recent events that have sparked protests in America and throughout the world.  Are things so much better 100 years later?"

"In 20/20 the racial slurs are not directed at the Haitian boys who crossed the Great Divide that separated the two neighborhoods but at the white boys who invited them to come over," said Clark.  Drawing comparisons to Twain's 1885 novel, where a white boy is conflicted between his role in white society and his instinct to help the runaway slave Jim, Clark cautions against focusing too much on the offensive words themselves and not the deeper meaning of what they are intended to convey.  "Maybe the offensive words convey more fear of losing one's place in society than hatred towards the 'other' - those who might take that status away.  That was true of Huck Finn then and 20/20 today."

More on S For Story
In a post script to the You Tube video, Clark adds a personal story about a case he handled as a lawyer in which a white judge kept the "N-Word" out of a police brutality case until a black judge overruled him and gave Clark permission to use the word in the case, giving a real life lesson in how certain words in today's world still make us feel uncomfortable - but are words worth repeating nonetheless.