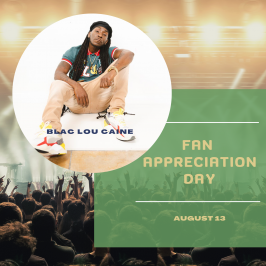 Fans of Blac Boi are in for a shocking treat when giving thanks for their support to one of their favorite hip-hop artists.
GREENSBORO, N.C. - s4story -- A celebrity in his own right in Greensboro, NC, Blac Lou Caine, formerly known as Blac Boi, has had a fascinating music career. Since moving to Greensboro at the age of 16 to pursue a career in music, Blac Lou Caine has made a name for himself in the music industry.

Working with artists like Tigo B, BankRoll Fresh, Travis Porter, and CAP-1, Blac Lou Caine has developed a considerable fan base throughout NC and around the world. And in appreciation for supporting his music career, his Cream Team Entertainment label present Blac Lou Caine's Fan Appreciation Day. On September 7th Blac Lou Caine will randomly invite four lucky fans to an Instagram live, where he will announce one lucky winner of the exclusive Cream Team Drip Bag. A luxury bag with gifts and prizes.

More on S For Story
Known for his chart-topping hit song "Back to the Money" featuring Tigo B. and "I'm Good" featuring Sequence, he's managed to introduce new material consistently. One such is the highly proclaimed self-made movie, "Due Season," that showcases the hip-hop star's acting ability. And then there's the latest mixtape "Out da Gate" with 320 SWOO that is sure to keep fans of Blac Boi, now known as Blac Lou Caine entertained.

Cream Team presents Blac Lou Caine Fan Appreciation Day, which is an opportunity to thank all the fans who have supported and followed the music career of Blac Boi sets up the introduction of Blac Lou Caine, who is the same person.