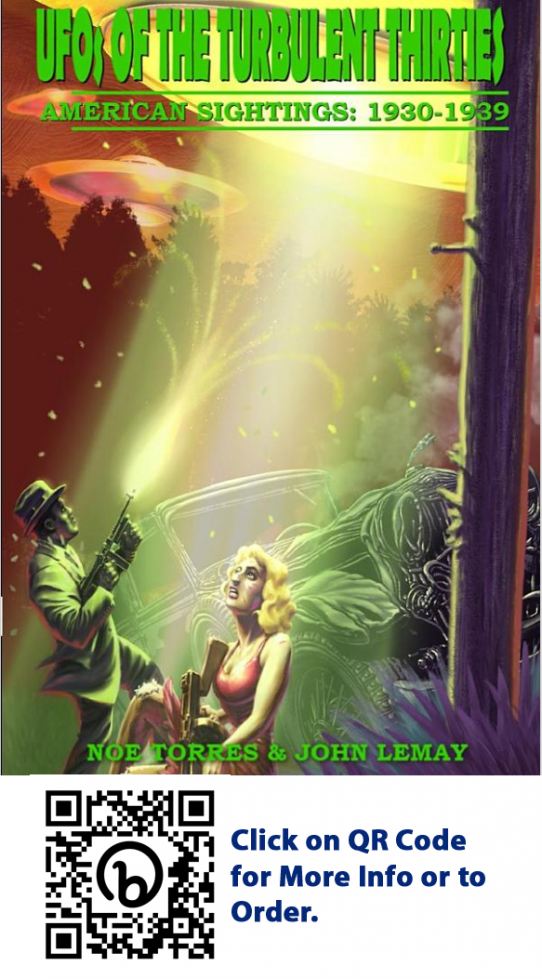 A new book by UFO researchers Noe Torres and John LeMay discloses UFO sightings and encounters that occurred in North America from 1930 to 1939, as the U.S. was suffering through the Great Depression and was about to enter World War II.
ROSWELL, N.M. - s4story -- It seems that "flying saucers" would be the farthest thing from the minds of Americans in the 1930s, and yet a new book proves otherwise. UFOs of the Turbulent Thirties discloses many astonishing UFO sightings that took place as America suffered through the Great Depression, gangsters roamed large cities, and the nation was on the verge of joining World War II. The new book is available at https://amzn.to/3ggAJCO or at RoswellBooks.com.

The book by UFO researchers Noe Torres and John LeMay is the eighth in a series covering the history of American UFO sightings from the year 1800 to 1939. Although UFOs did not fully enter the public consciousness until 1947, Torres and LeMay's books have disclosed thousands of significant encounters during America's formative years.

More on S For Story
"Thousands of books have been written about UFO sightings in the 1940s and afterward," Torres said, "But our books are among the very few that focus on cases prior to 1940. This latest book proves that the 1930s was a particularly active period for UFO and alien encounters throughout the U.S."

Included in the book is the amazing story of efforts by America's enemies in Nazi Germany to reverse-engineer flying saucer technology in order to conquer the world. In fact, according to the authors, the Nazis believed they were descended from extraterrestrials and were therefore entitled to exploit these advanced technologies, including experiments into time travel! Nazi experiments on rockets began in 1934.

Also out of the 1930s came the idea of a race of extraterrestrials with Reptilian features. Some Nazi intellectuals believed a master race of Reptilians lived in underground bases on Earth and had developed a powerful liquid energy source known as "Vril."

More on S For Story
While UFOs began grabbing headlines in the 1940s, the thirties saw thousands of accounts of major sightings throughout the U.S. Mysterious "Ghost Fliers" lit up the skies all over the country, appearing to be much more advanced than the aircraft of the time period.

The book also includes a truly astonishing story of  alien bodies and a recovered UFO that were supposedly stored beneath the Capitol Building in Washington D.C. in 1935!  Also covered is an apparent mass alien abduction of an entire tribe of Eskimos from the shores of Angikuni Lake. UFOs of the Turbulent Thirties is available at https://amzn.to/3ggAJCO or at RoswellBooks.com.