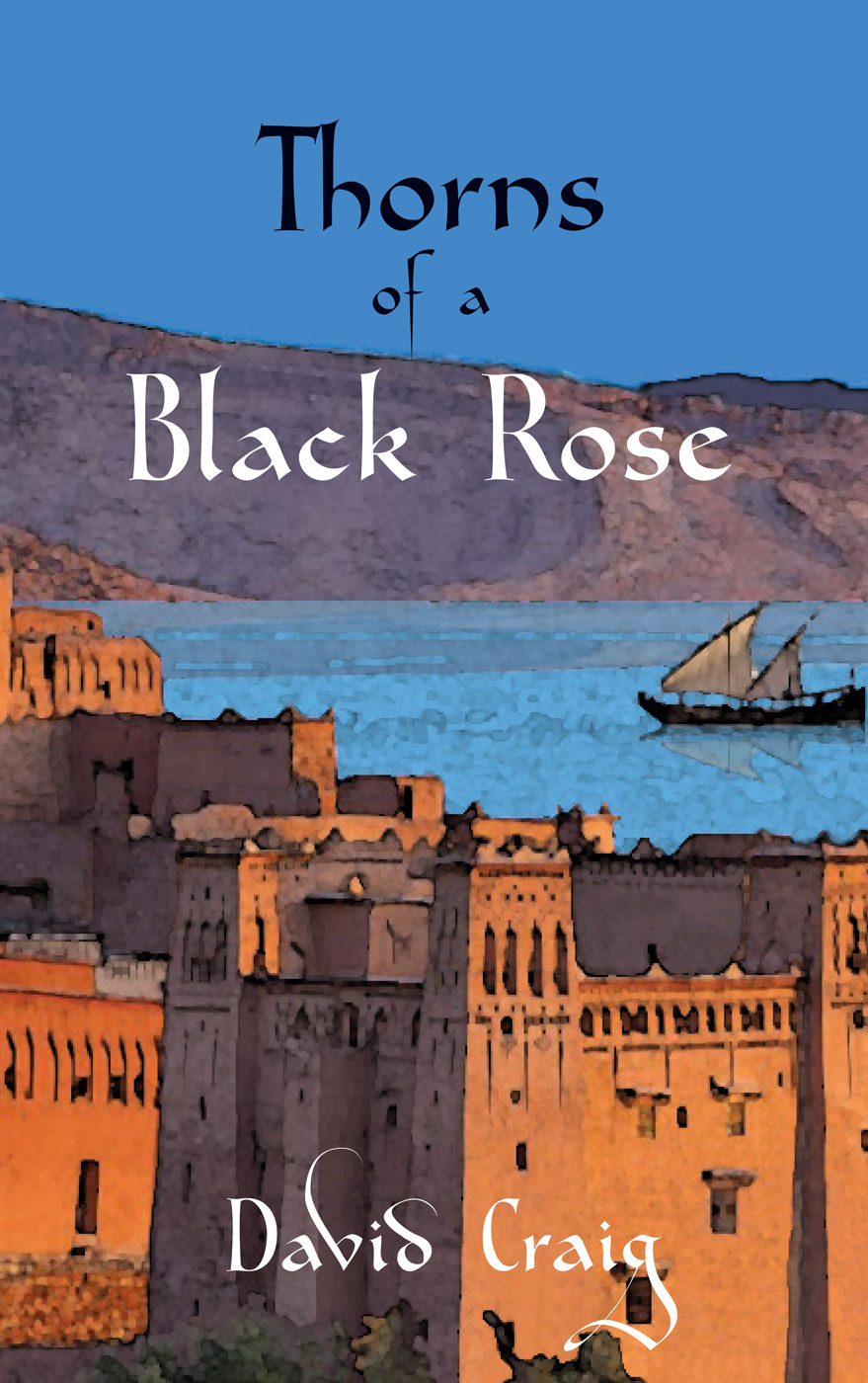 Set in a hot desert land of diverse peoples, this is a world away from the Scottish author's previous book (set in Victorian Glasgow) but has the same masterful storytelling.
DARTFORD, England - s4story -- Elsewhen Press, an independent UK publisher specialising in Speculative Fiction, is delighted to announce the publication of Thorns of a Black Rose by Scottish speculative fiction author, David Craig. Following on the success of his debut novel, Resurrection Men, a sequel to which is planned for next year, comes David's new epic fantasy set in a hot desert land of diverse peoples who are dealing with demons, mages, natural disasters … and the Black Rose assassins.

Although set in an imaginary land, the scenery and peoples were inspired by Egypt, Morocco and the Sahara. Mask is a living, breathing city, from the prosperous Merchant Quarter whose residents struggle for wealth and power, to the Poor Quarter whose residents struggle just to survive. It is a coming-of-age tale for the young thief, Tamira, as well as a tale of vengeance and discovery. There is also a moral ambiguity in the story, with both the protagonists and antagonists learning that, whatever their intentions or justification, actions have consequences.

David says, "This novel, and those to follow, were born of a desire to write stories set in a large, varied world, from vast, hot deserts to claustrophobic, humid rainforests, to snow-capped mountains and dark, frozen forests. A volatile, living world viewed through the eyes of a band of diverse, intrepid, morally ambiguous adventurers getting caught up in all sorts of trouble. My ambition is tell a series of sword & sorcery-esque adventures that stand alone in their own right while contributing towards a larger over-arching story."

More on S For Story
Peter Buck, Editorial Director at Elsewhen Press, says, "David has an uncanny skill to quickly transport you, as a reader, to the scene of his story. It may be a real place that is already familiar, such as Victorian Glasgow in Resurrection Men; or an invented city like Mask in the hot desert of Thorns of a Black Rose, where you can almost smell the aromas and exotic scents filling the air in the souk, or feel the heat radiating from the baked mud-brick walls. But, more than that, David introduces you to characters that you will soon truly care about, following them on their adventure: excited, worried, thrilled, shocked. David's books are ideal examples of what speculative fiction does best, transporting readers to another world; a perfect way to escape, albeit temporarily, from the banality or absurdity of the real world – which is especially welcome at the moment!"

About David Craig
Aside from three months living on an oil tanker sailing back and forth between America and Africa, and two years living in a pub, David Craig grew up on the west coast of Scotland. He studied Software Engineering at university, but lost interest in the subject after (and admittedly prior to) graduation. He currently works as a resourcing administrator for a public service contact centre, and lives near Glasgow with his wife, daughter and two rabbits.
Being a published writer had been a life-long dream, and one he was delighted to finally realise with his debut novel, Resurrection Men, the first in the Sooty Feathers series, published by Elsewhen Press in 2018. Before the next book in the Sooty Feathers series though, Elsewhen Press are publishing his latest fantasy epic Thorns of a Black Rose.

About the book
Title
: Thorns of a Black Rose
On a quest for vengeance, Shukara arrives in the city of Mask having already endured two years of hardship and loss. Her pouch is stolen by Tamira, a young street-smart thief, who throws away some of the rarer reagents that Shukara needs for her magick. Tracking down the thief, and being unfamiliar with Mask, Shukara shows mercy to Tamira in exchange for her help in replacing what has been lost. Together they brave the intrigues of Mask, and soon discover that they have a mutual enemy in the Black Rose, an almost legendary band of merciless assassins. But this is just the start of their journeys…

About the cover
The cover artwork, representing the city of Mask, was produced by PR Pope, an author also published by Elsewhen Press, based on David Craig's inspiration from his trip to the Maghreb.