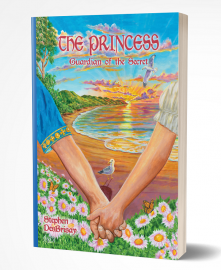 LOS ANGELES - s4story -- Southern California's own Stephen DesBrisay is currently preparing for his literary debut as an author this summer. DesBrisay is on countdown for the official launch of his new fiction release, "THE PRINCESS Guardian of the Secret", a fantasy adventure love story whose timely message is much needed in the divided times in which we find ourselves.

A beautiful young princess must solve an ancient riddle, fulfill a prophecy, and choose between love and duty to save her kingdom from total destruction. The right choice will break an ancient curse and heal the hatred, jealousy, and prejudice that had been plaguing two rival kingdoms for generations. This book is for those with open hearts or for those who need their hearts opened.

Stephen DesBrisay was born in Hollywood, California, and grew up in Manhattan Beach and Newport Beach, California. Stephen worked as an audio engineer and as a grip and electrician on movies and commercials in Los Angeles where he also produced his own films for corporate and non-profit companies. His love of music led him to work with various musical artists as a manager and consultant. He later moved to Austin, Texas where he now lives with his wife and works as a part-time consultant helping people with their entertainment projects. His gift of storytelling and creative mind eventually resulted in the amazing story in this book.

More on S For Story
Stephen's original plan was to partner with a writer but out of necessity, he decided to write the story himself and what happened was a miracle. He not only fell in love with writing a story about people falling in love, but people loved the story whether they were in love or not. The story seems to be able to open people's hearts and give them all fresh starts. As for Stephen, it has truly changed his life in so many positive ways. He hopes it changes yours for the rest of your days.

"An impossible wish wished on a possible night might bring an impossible dream
to a possible light. Oh, how I wish it might," ~ "THE PRINCESS Guardian of the Secret"


"THE PRINCESS Guardian of the Secret" is set to debut on Amazon in August 2020.

Filed Under: Literature
0 Comments
Latest on S For Story