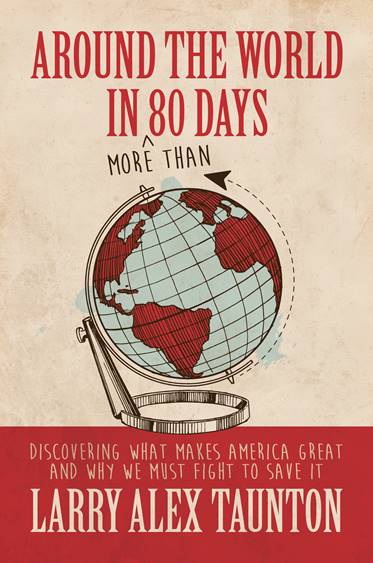 Is There A Better Place To Live Than America? Author Larry Alex Taunton Takes The Search On The Road...
LOS ANGELES - s4story -- The belief in "American Exceptionalism" is under attack, declares Larry Alex Taunton, an award-winning author, columnist, and cultural commentator. "A battle rages for the heart and soul of America."

For Taunton, the question comes down to: Is there a better place to live than America?

To explore the idea of "national greatness," Taunton went on a global odyssey, visiting some 26 countries. He records his discoveries in his new book, AROUND THE WORLD IN (MORE THAN) 80 DAYS: DISCOVERING WHAT MAKES AMERICA GREAT AND WHY WE MUST FIGHT TO SAVE IT.

If all of this sounds like a slog over some serious philosophic and political terrain, it is, but Taunton's wry humor leavens the loaf.

In a chapter on Sweden, for example, the author hears, on a boat tour of Stockholm, a litany of Swedish accomplishments from his guides: "America? We discovered that. Skype? We invented it. The flat screen? You're welcome. IKEA? You guessed it."

Taunton's mix of socio-political observations and cheeky wit in AROUND THE WORLD IN (MORE THAN) 80 DAYS opens the book up to a large and diverse group of readers.

More on S For Story
The online publication The Federalist says of Taunton's work: "The social elites want evangelicals to be as dumb as they suspect they are. But when a person comes along who proves that tale false, which Taunton clearly does…they simply don't know what to do."

In advance praise for AROUND THE WORLD IN (MORE THAN) 80 DAYS, Paul Reid, co-author with William Manchester, of THE LAST LION: WINSTON SPENCER CHURCHILL: DEFENDER OF THE REALM, 1940-1965 observes:

Larry Taunton—historian, columnist, and a man of abiding Christian faith—traveled (often at great risk to himself) to twenty-six nations in order to hold a mirror up to the United States of America and ask: Is America Good and is America Great? Mark Twain did much the same more than a century ago. Twain's and Taunton's conclusions are identical: There is no place—literally No Place—like home. "Around the World in (More Than) 80 Days is fabulous."  It's going on my shelf next to "The Innocents Abroad."

AROUND THE WORLD IN (MORE THAN) 80 DAYS is a book for all seasons.

Larry Alex Taunton is an American author, columnist, and cultural commentator. A frequent television and radio guest, he has appeared on CNN, CNN International, Fox News, Al Jazeera America, and BBC. You can find his columns on issues of faith and culture in The Atlantic, USA Today, CNN.com, and The Blaze. Taunton has been quoted by Rush Limbaugh, The New York Times, The Chicago Tribune, TIME, Vanity Fair, and NPR, among others. He is the author of "The Grace Effect" and "The Faith of Christopher Hitchens."