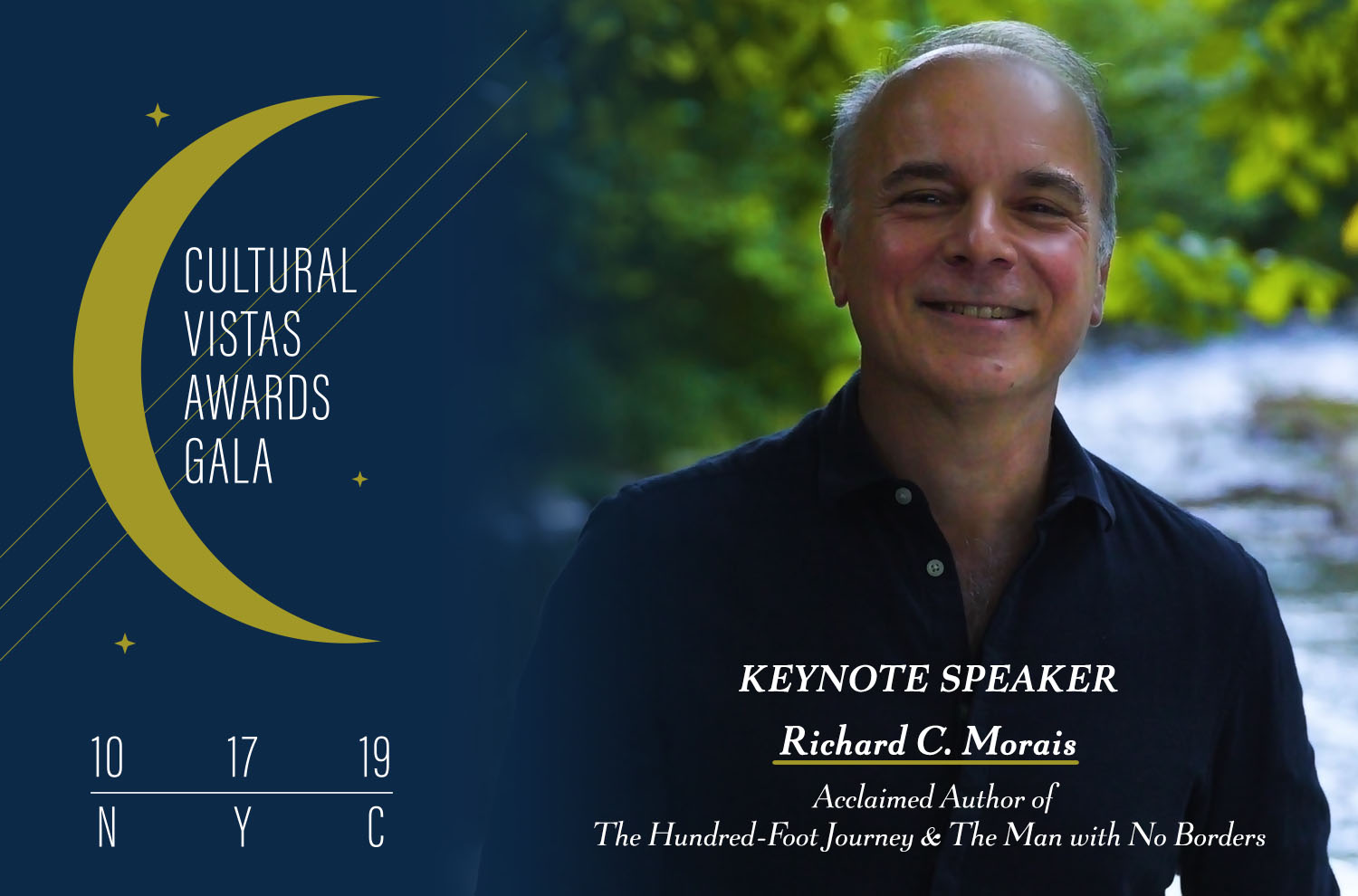 NEW YORK - s4story -- Cultural Vistas, a 501(c)(3) nonprofit that has facilitated skill-building international exchange programs since 1963, is pleased to announced that award-winning American journalist and novelist Richard C. Morais will be the keynote speaker at the Cultural Vistas Awards Gala on Thursday evening, October 17, 2019 at the Tribeca Rooftop in Lower Manhattan.

"We are honored to have Richard join us as our keynote speaker for this year's Gala," said Cultural Vistas President and CEO Jennifer Clinton. "He is a truly gifted storyteller whose work examines what happens on a personal and societal level when an individual makes their way from one corner of the globe to another in the 21st century. These are themes that deeply resonate with our mission at Cultural Vistas–to enrich minds, advance global skills, build careers, and connect lives through international exchange."

Morais is the author of the New York Times and international bestseller The Hundred-Foot Journey, a novel about an Indian chef who conquers the rarified world of French haute cuisine. The book sold in 35 territories around the world and in 2014 was released as a popular film co-produced by Oprah Winfrey and Steven Spielberg and starring Oscar-winning actress Helen Mirren and Om Puri.

More on S For Story
The complex issues that arise around diversity and the challenges and opportunities inherent to cross-cultural experience are a cornerstone of Morais' literary works, including Buddhaland Brooklyn and his third and most recent novel, The Man With No Borders, which Little A, the literary imprint of Amazon Publishing, is set to release globally on September 1, 2019. Morais also writes business biographies and wrote the critically acclaimed Pierre Cardin: The Man Who Became a Label.

Morais has a parallel career as an award-winning journalist. He was both the editor of Barron's Penta, a highly-profitable glossy magazine for wealthy families; and Forbes's European Bureau Chief, the magazine's longest-serving foreign correspondent, stationed in London for 18 years. His brief at Forbes allowed him to travel anywhere in the world and to write on any subject that interested him. His unusual business stories – from a controversial interview with Prime Minister Tony Blair at 10 Downing Street, to his profile of the low-key Indian billionaire Adi Godrej – led to multiple journalism awards.

Morais uniquely won three awards and six nominations at the Business Journalist of The Year Awards, the only competition in the world where the best U.S. and British business journalists competed directly in a single event. His literary works, meanwhile, were semifinalists in the William Faulkner Creative Writing Competition and short-listed for Britain's Ian St. James Award. Mr. Morais was named the 2015 Citizen Diplomat of the Year – the highest honor granted by Global Ties U.S., a private-public partnership sponsored by the U.S. State Department – "for promoting cross-cultural understanding in all of his literary work."

More on S For Story
Established in 2018, the Cultural Vistas Awards Gala recognizes individuals and institutions for their influence and notable contributions toward the advancement of global skills, leadership development, and cross-cultural understanding. This signature event brings together leaders from across the business, education, government, and diplomatic communities for an evening celebrating the diversity of people, ideas, knowledge, and skills shared through international exchange.

Founded in 1963, Cultural Vistas is a nonprofit exchange organization whose mission is to enrich minds, advance global skills, build careers, and connect lives through international exchange. Cultural Vistas develops international professional experiences that create more informed, skilled, and engaged citizens. Every year, Cultural Vistas' 30-plus unique exchange programs empower people in the United States and in more than 130 countries around the world to drive positive change in themselves, their organizations, and society.