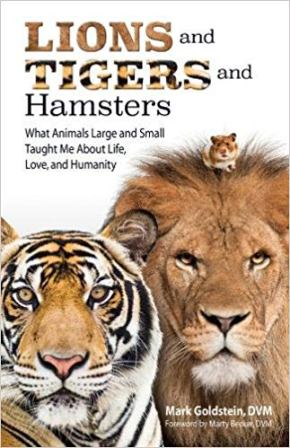 Exploring and Celebrating the Human-Animal Bond with Life Lessons Learned from Veterinarian of Small and Large Animals
SAN DIEGO - May 7, 2019 - s4story -- New book recapping a 40-year-career of a large and small animal veterinarian with touching and humorous life experience stories is out today.

Few people can say they have been kicked by an elephant and lived to tell the tale.  But veterinarian Dr. Mark Goldstein, a former Los Angeles and Boston zoo director and animal welfare advocate now living in San Diego, survived to share that story and many more in his new book, "Lions and Tigers and Hamsters: What Animals Large and Small Taught Me About Life, Love, and Humanity," comes out May 7 as a paperback and Kindle edition. (HCI Books—$14.95).

As a young second-year undergrad at Cornell University, Goldstein got the internship of a lifetime for a veterinarian-in-training at a safari park in Florida. In the haste of youth, Goldstein approached Donia, the matriarch of Elephant Island, and did not follow protocol by letting her smell his feet and then letting her lead. She paid him back for his rude manners by flinging him 30 feet in the air and proceeded to take the common elephant path of killing a predator by holding him on the ground with her head and lifting her hind legs to squash the intruder.

More on S For Story
Goldstein was able to roll into a nearby canal populated by alligators before the final crush could happen, and was rescued by park officials. What followed were days in the hospital with two broken bones, an injured neck, a bruised kidney and a footprint from Donia on his back.

"Donia taught me two lessons: never take an animal for granted, and following the rules can have tremendous value," Goldstein says.

That lesson served him well in his 40-year career working in small-animal and wildlife medicine and then as zoo director for the Los Angeles and Boston zoos. He also served as president and CEO of the San Diego Humane Society and SPCA.

In his book, Goldstein shares up-close and personal experiences of taking the rectal temperature of a 6,000-pound unrestrained and unanesthetized rhinoceros; teaching veterinarians how to spay and neuter dogs on a kitchen table during a war drill in the Hula Valley of Israel; and removing a tumor from a beloved goldfish that brought the owner, a child with autism, the calming comfort he needed. He recounts saving the canine mascot of a local order of Catholic nuns; almost coming face-to-face with a Siberian tiger; being responsible for the delivery of a baby lowland gorilla; and wrangling an escaped chimpanzee set loose by an animal rights group.

More on S For Story
Goldstein takes the opportunity in his book to discuss commonly asked animal welfare questions about the cost of veterinary care, why we have zoos and aquariums and homeless people and their pets.  He also helps the reader understand that euthanasia can be the most selfless act of love provided to a suffering pet.

"I found that people who value and love animals also hold a mutual respect for each other that transcends language barriers, cultural differences, religious beliefs and conflicting political opinions," Goldstein says.
https://www.amazon.com/Lions-Tigers-Hamsters-Animals-Humanity/dp/0757321860